Hello and welcome. Paintings and drawings are separated into two primary sections: On Canvas and On Paper. While there are some overlaps, the collections are fairly restricted to their respective sections. Series statements live in their own dedicated areas.

The PHOTOGRAPHY section features several themes that will be rotated over the year. I welcome you to meander across them all. For current work follow my Instagram pages @nazarevskaia.stills and @nazarevskaia.artphotography. I post BTS/Unit Stills, street photography, black and white urban and landscape images, and music photography to the first account. The second features images from the ongoing PRIVATE PROJECT series. Nowadays there’s actually a whole separate website for my photography: KristinaNazarevskaia.com. 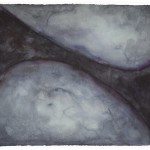 ARCHES is a series of watercolors on paper executed in a reduced palette. Each work is intended to highlight textures and materials used by Richard Serra in the creation of his Torqued Ellipses and Spheres. Most of the paintings measure about 22″ x 30″. You can read more about the inspiration behind the series here. 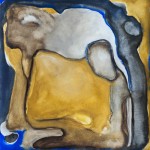 STUDY OF A COGNITIVE LANDSCAPE is a new series of watercolors and gouache on paper. I have been concentrating on an idea of reducing and concentrating my palette and this series was conceived and realized as an exercise in permutations of the iconic color schemes used by Franz Kline, Robert Motherwell and Richard Diebenkorn. I was also interested in reversing their, often monumental, scale and compressing the composition into a much smaller area, thus reversing and emphasizing the role of the viewer vs. the artwork. 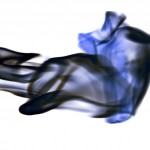 ELEMENT is a series of large-scale photographs of abstract forms focused around the idea of material and motion. I have chosen not to disclose the origin of the material or element itself, in the hope of prompting the viewers to conjure their own narratives instead of focusing their attention on identifying the material. The idea is to contemplate the weight of the object in front of you in relation to the direction of its movement. Does it propel you forward, pull you down or lift you as you interact with it?

There will be more works added to each series as time goes by. Some will also be removed as they are acquired by collectors.

Thank you for your continued support!

As Mark Rothko said, the painting can not exist without the viewer – you are the final stage that defines its completion!

“The object of art is not to reproduce reality, but to create a reality of the same intensity.” – Alberto Giacometti